The Vergis Corporation is a Tauron-based technology research company, competing for defense contracts with Graystone Industries. It is headquartered in Tauron City. ("Know Thy Enemy")

Tomas Vergis is CEO of the company. The company conducts research and development on the Meta-cognitive processor (MCP), which Daniel Graystone seeks to enhance his Cylon's artificial intelligence capabilities. ("Pilot")

Shortly after the MAGLEV bombing, Daniel asks Joseph Adama to use his contacts within the Ha'la'tha to steal the MCP. The MCP is delivered to Daniel, but two lab employees of the Vergis Corporation are killed in the process. ("Pilot") ("Know Thy Enemy") 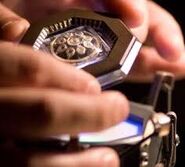 The MCP enhances artificial intelligence and was invented by the company.

Diagram of the Meta-Cognitive Processor (MCP)

Vergis accuses Graystone of stealing the MCP chip.
Add a photo to this gallery

The exteriors of the Vergis Corporation were filmed at Simon Fraser University in Surrey, British Columbia, Canada.[1]

Retrieved from "https://caprica.fandom.com/wiki/Vergis_Corporation?oldid=35452"
Community content is available under CC-BY-SA unless otherwise noted.